I do not understand how anyone can NOT be appalled by Donald J. Trump 's obnoxious hypocritical comments concerning so many things: He whines about reporters not naming their sources, yet feels free to make outrageous accusations concerning our former President, accusing him of a serious crime, without saying where he got the information. Also he did not say he suspected this, he said it happened, which would mean he has definitive proof. Not so long ago he claimed absolutely that he POTUS 44 was not born in our country from very "credible' sources, but never named them. #trumpLIES and even when caught in hateful lies has never to my knowledge apologized!
He accuses journalist of breaking the law, for discussing 2 pages of his discovered LEAKED tax returns, even though clearly he is wrong in this. He complains about them using information VALIDATED by the Whitehouse and then calls it #fakeNews. Meanwhile he praised criminals who stole private emails and even encouraged Putin's Kremlin hackers to commit more crimes to benefit his campaign.

He attacks our justice system for not allowing him to violate our Constitution, when he has a long history of being involved in thousands of lawsuits both as defendant and plaintiff. He has pleaded guilty to crimes and settled, the way sadly, the very rich,often are allowed to do.
I can't wait for him to be questioned under oath and for his statements to be used against him. I hope someone does their job well and he is forced to resign, impeached and eventually am hopeful that he will be found guilty of  #TREASON. 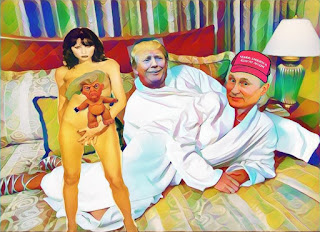