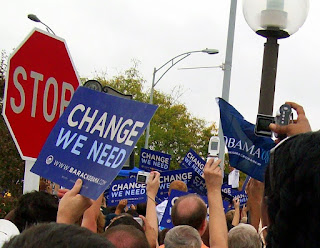 change we need.
Elaine Marshall is still tring to raise money for a TV ad. Burr has lot's of bu**sh** on the telly already.  Here's why http://yhoo.it/9pLP8Y  "GOP groups overwhelm Dems" money from m/billionaires and corporations to repubs and bogus grassroot group's ads with very little accountability. Soon derugulation and tax breaks for the rich may be all that will COUNT!  Money talks period.
Millionaire and Billionaires and Corp.s are funding the repugies 6 to 1, along with other bogus grassrooty groups-like those funded by the billionaire Koch bros that are running anti-Obama/dem bu**sh** smears. Also thanks to GOPers like Sen. Burr there is no accountability or right to know who is paying for whatever crap! That's why in NC we are already seeing way too many of Burr's bu**sh** ads while Elaine Marshall is still trying to raise enough money to make a commercial.
Posted by jarnocan at 8:27 AM


My name is Barbara O’Brien and I am a political blogger. Just had a question about your blog and couldn’t find an email—please get back to me as soon as you can (barbaraobrien(at)maacenter.org)