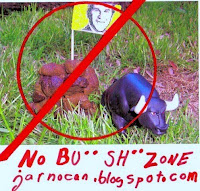 Our country's crisis should not be an excuse to duck out.
If there were ever a time we needed to hear the candidates' plans for how they'd run the country, it's now. http://site.PFAW.org/Debates
DON'T LET MCCAIN AND PALIN DUCK THE DEBATES!
NOMO BU**SH**
Also I love this important clue heard this AM on the TODAY show concerning what at times became a shuting match (and reportedly Mcain not saying much but OBAMA asking importnat questions):
"The republicans were done on their knees begging the democrats not to go PUBLIC with their objections" Think hard: could it be they don't want US to know who really gives a rat's ass about US???? I honestly don't know how anyone making less than $250,000 a year could consider voting for a repub.
Posted by jarnocan at 7:19 AM