From MY DH a former (recent) republican now an INDEPENDENT:) 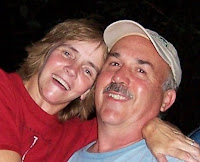 Now, what it comes down to is this. Either you're pissed off that Bush has taken this country to hell in a hand basket and will do whatever it takes to keep McCain from following his lead and taking us down the same road of an extremely high deficit, energy prices that are going through the roof,
mortgage foreclosures at an all time high, high unemployment and a senseless
war that has taken 1000's of lives and promises to take thousand's more- OR
you can be upset that your preferred Democratic candidate didn't get the
nomination and so you prefer to either not vote or do a 'write-in' (you
might as well write in Mickey Mouse).

This country NEEDS CHANGE but it's not going to happen if the Democratic party doesn't stick together and keep us from another 4 years of Bush-enomics. I'm not sorry that Obama is the presumptive nominee- I like him. I like what he represents and I like thatfact that he doesn't have the connections that Hillary has in government. I think he'll shake our government to it's knees and get rid of (at least
some) of the greed and corruption that has consumed Washington.

I trust what he says and what he promises and feel that he will be the most likely candidate to create a much needed change . I like his economic stimulus package providing tax refunds to the middle (working) class, his foreclosure
prevention plan, his idea to eliminate income taxes for seniors making less
than 50,000 dollars and his ideas towards Green technologies investing in
alternative fuels and hybrids. I like his ideas on the prevention of
mortgage fraud, raising the minimum wage, giving tax breaks for companies
that DON'T ship their jobs overseas and taxing companies that do. I could go
on and on but if you're interested you can look at his website. I also like
Hillary for many of the reasons you mentioned....I would vote for her as I think the alternative is just un-thinkable.

What scares me to death is the attitude against Obama. Living in North Carolina has made me painfully aware of the prejudice that stills remains in this country as I've heard from many sources (including our own mother) that they would never vote for a black man. Hell- half of this country still thinks he's a Muslim and a large
percentage of the remainder are just fed up with the Obama Hussein
thing..duh. We are a nation of idiots that vote for whoever Rush Limbaugh
tells them to and that leads me to think that any vote that isn't for our
Democratic nominee is a much needed but wasted vote towards change and for
another 4 years of the same crap. I do agree that Hillary has taken more
than her share of negative comments- and yes, even Obama has added a few
cuts of his own like the Annie Oakley sting which to me was quite funny
after her desperate attempt to rope in some votes with her 'gun behind the
woodshed' comments- he's also said some very positive things towards her.
But you can't tell me that Obama hasn't been defending his own religious and
social beliefs throughout the entire primary - take the Jeremiah Wright ad
nauseam for instance. That did more damage towards his campaign that any
other, and why- because he was a member of that congregation which
incidentally wasn't a Muslim church. You'd think somebody would have put
that little tidbit together. Unfortunately, negative campaigns now seem to
be the norm- something else I'd like to see changed.

All I can say really is that I'm scared to death. I'm afraid that my job is headed towards India, I'll lose my home and my savings will be wiped clean trying to recover. My health care will be gone and in about 10 or 12 years when I'm ready to retire,
I'll have no Social Security to fall back on because the government will
have eliminated that to try and pay off our enormous deficit. I hope
everyone out there in America realize that we don't have the money to pay
for this war. We have been funding it through loans that we'll never be able
to pay off if this war continues. Currently our National Debt is over $9,501,703,920,454.00- increasing at over $1.73
Billion per day. I don't know.somehow Hillary's problems about some
negative comments don't really seem to compare to not trying to do something
about this.......