Associated Press report on September 27, 2001, that terrorists from the 9/11 hijackings were seen on Abramoff's SunCruz gambling boats

http://www.dailykos.com/story/2006/1/22/19552/5785 Must read article on Whistle blowers, and why their information is so critical to US and our world. Often they are our true American heros.
Posted by jarnocan at 9:29 PM No comments: 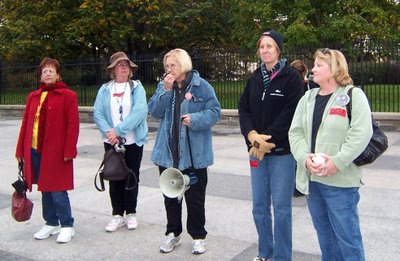 Gold Star Mom's for Peace and Col. Ann Wright. One mother of a soldier that is still serving said what really bothered him was that often they do not know who they are killing, they often just can not tell. She also sent him tons of food because where he was stationed was hours from the cafeteria, and I guess the army doesn't deliver. He did not have time often to go for meals. He also reminded her that the number we usually see-of soldiers killed in action are only those that die- DOA of very shortly there after, around twice that number die from serious injuries -head injuries etc. days or weeks later, so the actual number of soldiers KILLED in BU**SH**'s war is close to 9000! Several thousand more are still alive but so severely injured they likely will never even know they are 'home'. 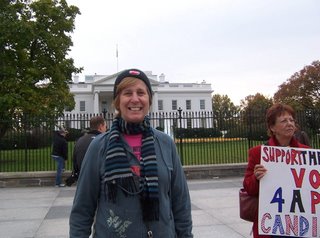 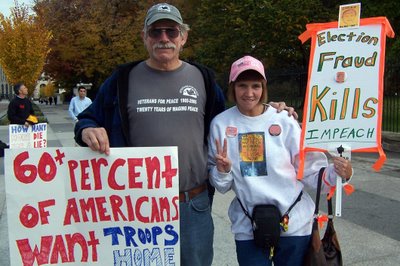 Just a quick hello, and a link to a wonderful site to keep track of election issues. http://velvetrevolution.us
Posted by jarnocan at 8:41 PM No comments:

Day of the Dead is over, and election day is almost here. 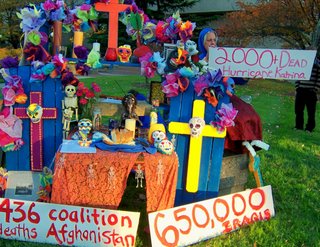 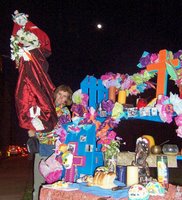 Way too many have died, too violently and too soon, due to election fraud in the USA. http://www.flickr.com/photos/jarnocan/?saved=1 for more photos from Day of the Dead in Greensboro, NC.
http://velevetrevolution.us a link with information to help make our votes count,restore our democracy, and thereby work for peace, justice and accountability.
Posted by jarnocan at 9:48 PM No comments: