Here it is in case you were wondering!

YES, he should, (OMG- get a clue!) be IMPEACHED ! http://impeachforpeace.org/evidence/
Posted by jarnocan at 8:45 PM No comments: 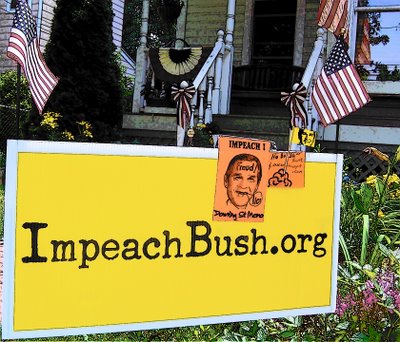 On August 6, 2001, George W. Bush received his Presidential Daily Briefing. The briefing described active plots to attack the United States by Osama bin Laden. The word "hijacking" appeared in that briefing. Bush reacted to this warning by continuing with his month-long vacation in Texas.

so many more lies so many more REASONS! http://www.worldcantwait.net/ for more to do to HELP US and our world!
Posted by jarnocan at 7:55 PM No comments:

Mark Levine and his new book -link to info here 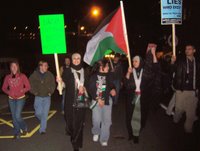 Overthrowing Geography: Jaffa, Tel Aviv and the Struggle for Palestine, was published by the University of California Press, while his new book,
Why They Don't Hate Us: Lifting the Veil on the Axis of Evil, was published by the Oxford-based Oneworld Publications. He also is the editor, with Viggo Mortensen and Pilar Perez, of Twilight of Empire: Responses to Occupation, which features leading scholars and activists from the US and the Muslim world writing about the US occupation of Iraq (including Naomi Klein, Mike Davis, Nadia Yassine, Jerry Quickley, Amir Hussein, Jodie Evans, Amb. Joseph Wilson, and others.


He is a professor of Modern Middle Eastern History, Culture and Islamic Studies at the U of C and made an all too BRIEF appearance on Fox (gag) spews recently along with the intensely hateful David Horowitz. http://www.meaning.org/levinebio.html this article has MANY GREAT links and information. I would encourage you to explore and learn.


The promise of the ``good life" it announces cannot be realized without a global commitment to the political, economic, and cultural development that makes such progress possible

Americans must decide: is US foreign policy going to continue to be characterized by lofty rhetoric that is rarely matched by substantive support for peace, democracy and sustainable development; or is the US finally going to live up to its highest ideals?

Please do not take these small quotes as a summary, explore for your self there is much to be learned here. I am just beginning.....
Posted by jarnocan at 8:44 AM No comments:

Abeer was raped and murdered.

Abeer and her sister

Her family was trying to arrange to get Abeer out of harms way, she had been improperly harassed at check points, but they were sadly too late.
She along with her little sister and her parents were all murdered. The attack was calculated and cruel.
To lightly dismiss this horrendous deliberate action, is an unforgivable insult to the Iraqi people, as well as to thousands of our own soldiers who struggle to remain decent and humane against great odds. Many will unfairly bear this horrible burdon of escalating hate, because of the inhumanity of a few.
This is somewhat like what our nation is experiencing under the cruel BU**SH** regime.
Posted by jarnocan at 9:07 AM No comments: