PLEASE say NO to NUCLEAR war! Tell them! links and more... 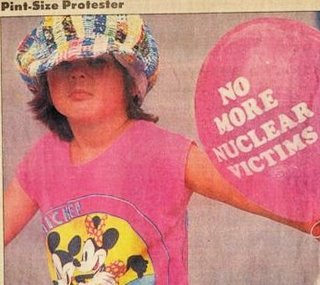 http://www.democracyinaction.org/dia/organizationsORG/codepink/petition.jsp?petition_KEY=262 of course you may add YOUR important comments!

Bush threatening a nuclear strike is not only illegal but threatens to destroy 30 years of efforts toward non-proliferation and disarmament, and could even trigger a global war.

Yesterday's New Yorker quotes a number of high-ranking administration and military officials on the possibility of pre-emptive war with Iran. Not only do the officials say war is really on the table, they report that the Bush administration is making plans to use nuclear weapons.

the consequences of an actual attack would be horrifying. The civilian deaths from a nuclear assault could be in the thousands or hundreds of thousands. According to a front-page article in the Washington Post, CIA experts believe Iran would almost certainly counter-attack through its terrorist network, Hezbollah.6 With 150,000 American troops right next door in Iraq, Iran would have what security experts call a "target rich" environment. Even Jack Straw, the British Foreign Sectrary, said that the nuclear option was "completely nuts."

(photo form Syracuse Newspapers - my daughter 20 years ago)
Posted by jarnocan at 7:50 AM

I have heard about this on a Greenpeace site and I have send a letter!

thanks, I think more people are beginning to understand we are living in very dangerous times.