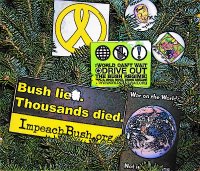 ....political operatives who can turn the Christmas celebration ..... a traditional message of love, peace and tolerance into one of anger, conflict and resentment.
... the American Right in extracting a “war on Christmas” out of a few well-meaning gestures to non-Christians, such as using the greeting “Happy Holidays,” is a testament to the investment conservatives have made in media over three decades.
.... the Right now can take a few scattered anecdotes on almost any topic and heat them up into a hot-button issue.
This “perception management” capability is now so powerful that even the most absurd notions can be made convincing to millions of Americans.....


Bush himself-or his crafty handlers like to play it both ways-for sure-remaining above the fray-so he sent 'Happy Holiday' cards out-very nice ones-and did catch some flak for it from some on the far-right. I guess they like to shake his tree once in a while to remind him THEY are his base.

Making regular folks feel threatened by a silly non-exsistant war on Christmas is a distraction, a useful device.
Please it is very worth reading the entire LINKED article - actually a wonderful site for an in depth HISTORY of the Bush regime- VERY FACTUAL!!!! FACTS not just smears.
Posted by jarnocan at 7:40 AM