Bitter Fruit a tribute to our fallen. 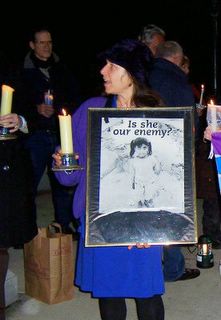 by Paul Fusco Focuses on the families and funerals Sad but well done. Even if you do not have much time, worth taking a look and listen. If you have to you can advance to the end.

A Message from Cindy Sheehan
http://www.michaelmoore.com/mustread/index.php?id=529 There was a man there who had several signs which among them said: "Saddam loves Cindy." This man didn't care that Rumsfeld ... was buddy, buddy with Saddam and gave him or sold him tons of WMD's before he became our enemy. I told this man that he didn't bother me, and he told me I don't bother him either. Well, if I don't bother him, why did he come down and make signs and march for hours screaming that I kill our soldiers? We found out why. He was making 60 dollars an hour to do so from some non-profit, right wing group.

The BushInc. have a history of making Bilions in the defense/WAR industry as well as oil, 'The Iron Triangle'.
Posted by jarnocan at 10:30 PM