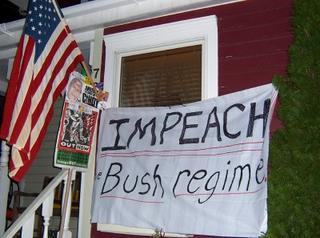 http://www.unitedforpeace.org/artic...st=type&type=91 learn the truth-make the effort. http://meetwithcindy.org
http://onemillionreasons.org Lance Armstrong and many other wonderful people -famous and not have signed and told their reasons: Why the war in Iraq is not good for US.
http://www.truthout.org/

The far right makes a big deal in their usual virulent,negative often dostorted way that George soros funds pro-democracy movements. I admire, respect and appreciate him for doing that. He has helped build democracy and more open societies around the world.
What is Open Society? http://www.civicua.org/soros/en/os.html

An open society is a society based on the recognition that nobody has a monopoly on the truth, that different people hold different views and interests, and that there is a need for institutions to protect the rights of all people to allow them to live together in peace....Generally speaking, an open society is characterized by a reliance on the rule of law, the existence of a democratically elected government, a multifarious and vigorous civil society, and respect for minorities as well as minority opinions.

http://www.soros.org/about/overview
Democracy, equality, education, honesty; aren't these good all-Amercan values? Learn the truth. and then compare him to the Trillionaire-likely #1 $$$$ contributer over many years of the BUSH regime MOONIETOONS -he does NOT believe in democracy at all-so why does he do so much for BUSH? http://consortiumnews.com is a source of information on this ugly history of BU**SH**.
Posted by jarnocan at 7:17 AM