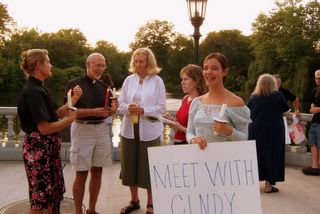 Emily from the Social Security BU**SH** townhall protest attended the Meet with Cindy vigil with her parents.
The above link takes you to TruthOut's live Cindy blog with videos etc. I would also encourage you to visit their home page and go on from there....We have a right and need to know the truth!
Posted by jarnocan at 6:22 PM

please feel free to post and send this scribble in it's entirety, including links.

Freedom, Peace and Security will NEVER be won nor secured by the sword, another war will always need to be fought to end the fear of the sharp blade against the vital thoughts of change.

The last war will be waged without soldiers or freedom fighters, without blood shed or death, no rockets red glare, no bombs bursting anywhere.

The last war will not cause suffering, broken hearts, splintered spirits, or shattered bodies and souls, the creation of nature and man will not be crushed under the rolling thunder of armored machines, chemicals will not rain down from above, maniacal viruses will not attack from within, suicide terror raids, genocide, and nuclear holocaust will have no place in the last war, the casualties will be the end of competition, industry, government and religion which plan for and carry out the destruction, addiction and control of others.

The last war will be waged BY THE PEOPLE FOR THE PEOPLE, a war where all things will be TREATED as equal, a war employing weapons of MASS COOPERATION, battles fought and won with tolerance for all, understanding of difference, awareness of responsibility, a war in which compassion and love conquer and destroy the final evil enemy of humankind, the last war, the mother of all wars, the war to end all wars, must be waged upon fear.

We the People, declare a global war on fear.

We start by turning away from those who support fear, by denying our services, our employment, our political, financial, moral and spiritual support to those who build and profit from the economy of competition, addiction and war.

We wage the last war by demanding that our energy and environment be clean and renewable, by demanding that the thousands of billions of dollars spent yearly on making the weapons and means of war be shifted and added to the nearly meaningless hundreds of billions which is reluctantly parted out for social, health, education and domestic infrastructure.

We win the last war by simply entrusting our votes, our support, our children's and grandchildren's lives to those of US whose words and actions - DELIVER - compassion, love and truth.


We the people can, will and must defeat fear.