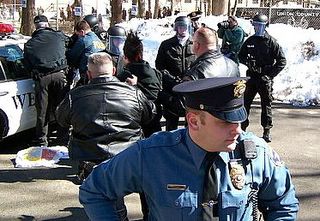 Teen boy arrested after Emily see below. Her cloth banner can be seen laying on the ground next to the police car. She has been slammed on the front of the car and handcuffed. It look like they were arresting a terrorist.

Above link will take you to an interesting article concerning both; Rove and Sen. Durbin 's recent comments.

The Rove speech put down a marker for any U.S. political figure who dares criticize aspects of Bush’s war policies. Dissenters will be accused of endangering American troops – as sure a way as can be imagined to throttle a public debate.

Like I say it is all about intimidation and attack. Honesty is not a part of the game plan- and must be suppressed. the Bu**Sh**INc. plays dirty dodge ball, and they want to win "at any cost" to US.
Posted by jarnocan at 12:20 AM